History doesn’t repeat itself, but it often rhymes

History doesn’t repeat itself, but it often rhymes

It is impossible for anyone to predict the future with absolute certainty however, by looking at events through a historical context, we can often gain some insight as to how the future could play out.

When looking at the COVID-19 pandemic, a historical event which offers some similarities to what the world is currently experiencing is the Spanish Flu pandemic of 1918-19.

The Spanish Flu is so named because Spain was neutral in the First World War (1914-18), which meant it was free to report on the severity of the pandemic. It was caused by an H1N1 virus with genes of avian origin and although no agreement on the source of the virus has been established, it is thought that soldiers serving in World War I who were gathered in large groups and living in unsanitary conditions aided the spread of the virus[i].

Whilst equity markets and the global economy in 1918-19 were very different compared to today, the key point for an investor to take note of is that the Spanish Flu pandemic had three distinct waves. The first “Spring” wave, took place in March 1918 for six months. This wave was not particularly deadly in nature however, it was followed by a second “Autumn” wave, which took place from September to November 1918 and was highly fatal. There was an additional third wave in 1919 but the death rate never reached the highs of the second wave [ii].

By contrast, the initial COVID-19 wave has not been followed by a second wave. Equity markets have continued to rally since the initial lockdown was announced and seem to have discounted any possibility of a second wave, firmly putting faith in a vaccine being produced in the not too distant future. Of course, we all hope that this will be the case, but in the event we do witness a second wave of the virus leading to another lockdown, the market will likely take fright.

It is important to highlight that when comparing the Spanish Flu pandemic and the COVID-19 pandemic it is far from an exact science. There are a range of factors that could be said to be true in 1918 that are certainly not today, and therefore may very likely result in a different outcome. COVID-19 is a coronavirus whereas the virus that caused the Spanish Flu was an influenza and both diseases have very different age specific mortality rates [iii]. We have also seen huge advancements in medicine, hygiene and nutrition since 1918.

That said, the impact of COVID-19 is already costing the treasury tens of billions of pounds [iv] and any prolonged extension or reintroduction of lockdown measures will add further strain to the already stretched public purse and unemployment rates. So, although a second wave may not materialise, we as investors must take note of the lesson history can teach us. 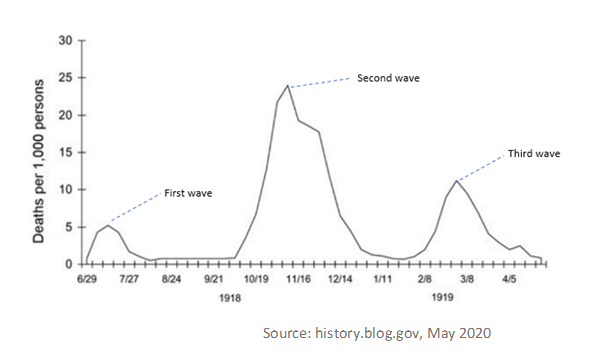 Ultimately no one knows the direction this pandemic will take, hopefully soon all our lives will have returned to a new normal and our loved ones will be safe. But as investors, it is imperative for us to take insight wherever we may find it, especially when the future is so clouded. History may hold clues to how events could unfold and what this may mean for equity markets. As Mark Twain is reputed to have said, “History doesn’t repeat itself, but it often rhymes”.

[i] Gov.uk, The flu that wasn’t Spanish

[ii] NCBI, 1918 Influenza: the Mother of All Pandemics

[iii] Our World in Data, The Spanish flu (1918-20): The global impact of the largest influenza pandemic in history