Two Out of Three Ain’t Bad

Surprisingly empathy tends not to feature highly in song lyrics, considering that most songs are either about the beginning or the end of a relationship. Presumably those in the throes of highly successful relationships are too busy empathising to commit their feelings to music.

Whatever the reason, we are trying hard to understand markets, but right now markets just don’t seem to care. The disconnect between the ebullience of equities and gloomy economists could not be starker. The recent coincidence of a return to the black for the S&P and the gloomiest ever predictions from the Organisation for Economic Co-operation and Development (OECD), World Bank and the Federal Reserve seem to emphasise that point nicely. Lots of shouting but no listening. Both parties can’t be right, so for now, they are going their own separate ways.

If you search songs about empathy online, there aren’t many of them. Alanis Morrissette has a go, but it is peppered with the perpendicular pronoun. In fact, that seems to be a feature of most love songs too. Our title song personifies that. The lyrics reveal nothing about what Meatloaf’s imagined interlocutor might feel about having just two of her three boxes checked! We can empathise.

We saw the deep economic dislocation that would occur as a result of COVID-19 lockdown measures, the likely quantum of policy response, but not the seemingly perverse reaction of equity markets (Figure 1). It does not feel good at all. Two out of three is not enough! We strive for better. 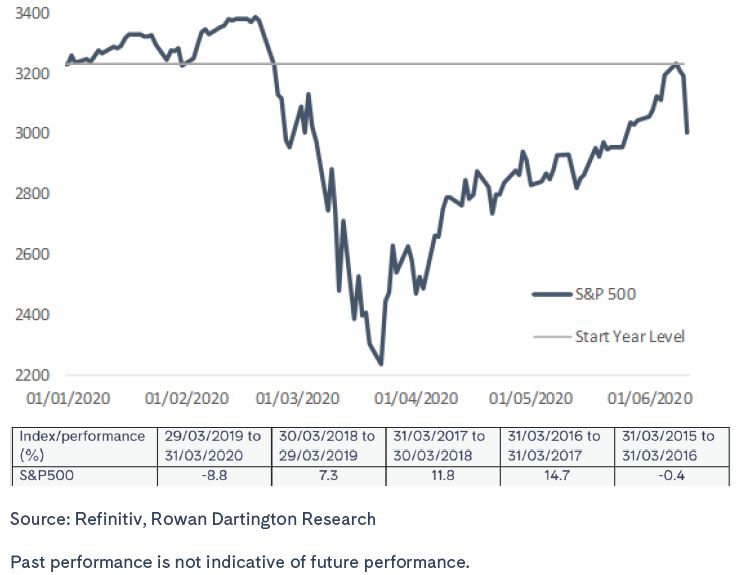 In April, the International Monetary Fund (IMF) was the first supranational agency to publish economic forecasts. Their estimates of global Gross Domestic Product (GDP) growth were for a contraction of 3% in 2020. Quite a fall given the post Lehman 2008 prediction for 2009 was for a contraction of less than one third of the 2020 forecast. We have now seen a number of other supranational agencies produce post COVID-19 forecasts, notably the World Bank and the OECD. Two months on, and economists are way more pessimistic about the future. The OECD is the most bearish, forecasting a drop in 2020 GDP growth of between 6 and 7.6%. The World Bank is in the middle at a decline of 5.2%. The trend seems clear, however.

The IMF forecasts were also more “V” shaped in their profile, with a sharp contraction seen in 2020, followed by a strong recovery in 2021, albeit not quite enough to recover all the lost output, but also not too far away either. The feature of the new forecasts is that not only are they more pessimistic about 2020, they also emphasise the downside risks to their numbers, and the possibility that “recovery” of that lost output will likely be a multi-year event, extending beyond 2021. These forecasts should not be equity market friendly in any way at all.

Perhaps the most obvious point to make about all these forecasts is the depth of the global recession. Compared to the last downturn, these forecasts are suggesting a forthcoming recession between two and four times the magnitude of the last one. Not only that, but the chronology of these forecasts implies that the more economists learn about the economic impact of lockdown, the more pessimistic they become about economic growth prospects. There is no sugar coating it, the top-down outlook for economic growth is dire and getting worse. 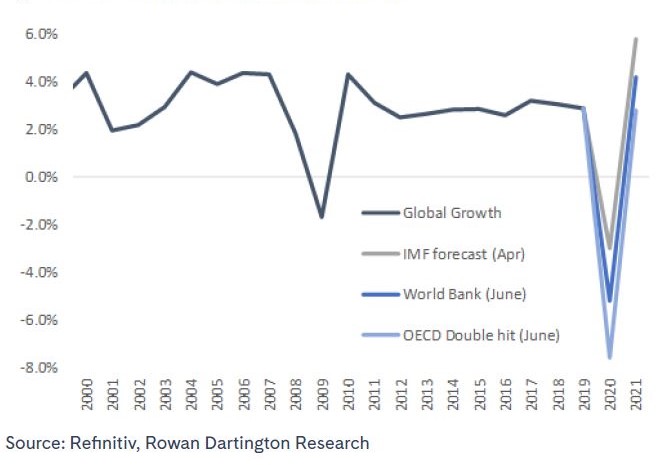 Top down economists are clearly becoming progressively gloomier as the COVID-19 crisis unfolds. While they are predicting the worst recession in living memory, bottom up company analysts’ have remained rather more sanguine (Figure 3). This may be where part of that disconnect originates. In 2001 when analysts’ Earnings per Share (EPS) growth forecasts bottomed at nearly 2% lower than the year earlier, global growth remained positive, bottoming out at around +2% year on year. EPS growth appeared to be geared into global growth, falling proportionately more than GDP. When GDP bottomed out in 2009 at -1.7%, analysts’ EPS forecasts had fallen by more than 40% year on year. Clearly more gearing into GDP growth there too.

Not only that, analysts spent more than a year, revising down their EPS growth forecasts before finding the floor for that cycle. This year, after just two months of forecast revisions, analysts’ EPS growth forecasts have fallen to just -25% year on year. While that number is still geared into growth expectations, it is a demonstrable lower level of gearing into the expected GDP contraction of 8% year on year in the worst case expressed so far from the OECD. This all suggests to us that the process of downgrades is far from over, and that the next earnings season may provide the catalyst for further revisions.

There is another strand of information in the analysts’ forecasts that may provide a clue about the likely profile of corporate earnings. That is the difference between the 1-year and 2-year forecasts in these numbers. In both previous recessions, the downgrades to EPS growth were symmetric, with roughly the same degree of revision to both numbers as analysts saw the recession as a multi-year event. This time, downgrades have disproportionately hit the near-term expectations (down 25%) leaving the year 2 forecasts (down 12%) relatively unscathed. Could it be that analysts are forecasting a deep but very short recession, front loading earnings recovery into the back end of this year rather than next? If that is the case, then they will be very sensitive to “second wave” news flow, and Doctor Anthony Fauci seems to be the bearer of bad news. 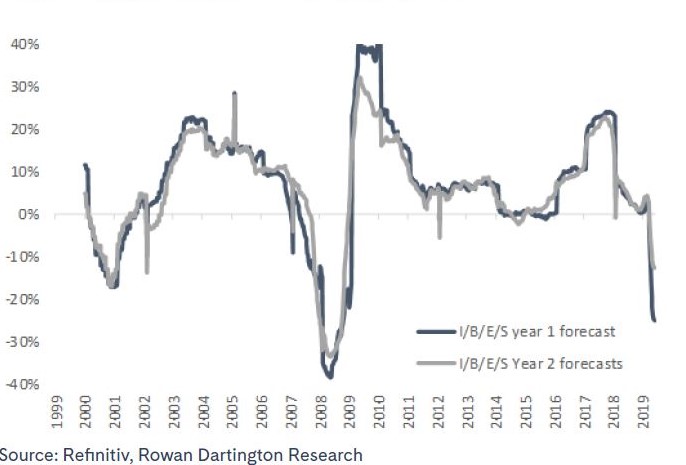 There may be something more basic at work, however. Recent experience has shown us that recessions unfold gradually, and equity markets adjust valuations over a similar time frame. In Figure 4 we have plotted the S&P 500 from the cycle peaks of 2000, 2007, against the progress so far from the 2020 peak forward 500 trading days. The last recession was priced into equity markets over the course of a year and a half. The dot com crash took longer still. Why would we expect equity markets to have fully, and accurately appraised the necessary valuation adjustment to COVID-19 in just over a month?

That seems rather unlikely, particularly given that economists (and analysts) have continued to revise down their expectations on the news flow through this crisis. It seems likely to us that the process of adjustment is not yet over. We do not want to get too bearish, but this equity market adjustment process may even continue into next year if the previous two examples are anything to go by.

Understanding the market dynamics of COVID-19 is not easy, and equity markets this year have been Trixie to say the least. While we think we have a handle on what is going on, and the likely trajectory for markets includes another leg downward, we are also listening and testing that hypothesis. While Meatloaf sang, “Baby we can talk all night. But that ain’t getting us nowhere.” We are more inclined to keep the conversation going, because two out of three is not what we want at all. Brace for more volatility to come as equity markets may not yet fully reflect the economic price of COVID-19. 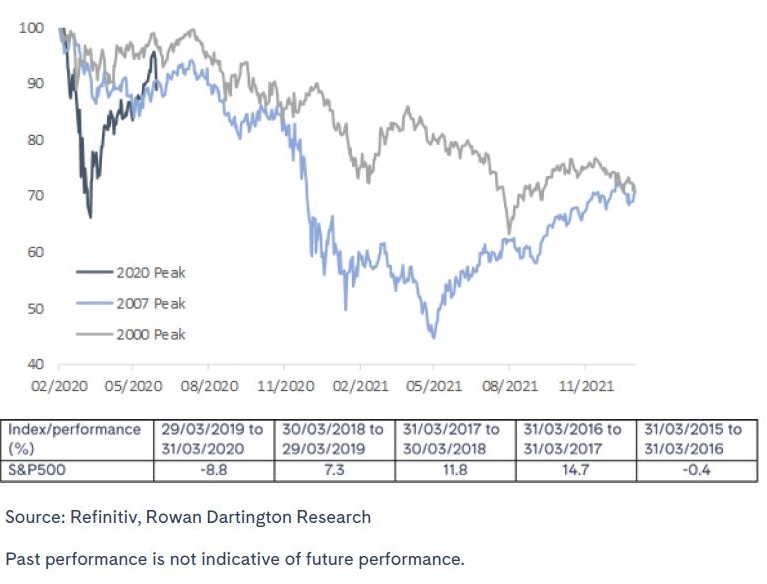