Many industries may view 2020 as an annus horribilis, but perhaps none more so than the retail sector, in particular the UK high-street.

Prior to 2020, the UK high-street was already in decline, perhaps unsurprisingly with the continued rise of Amazon and other online retailers such as ASOS and Boohoo to name but a few.

So, could COVID-19 be the death of the high-street? With a nationwide lockdown in force, many retailers closed their stores and those who would usually prefer to use the high-street had very little choice but to order online. As lockdown eases, many of these high-street shoppers may have been converted to the benefits of online shopping, which will only compound the misery on the high-street if they fail to return.

A bonus of online shopping during lockdown was that most people were at home to receive their deliveries. With this, orders with online retailers subsequently increased. This was confirmed in Amazon’s quarterly results released on 30 July. Net sales increased 40% and net income (profit) increased 50% compared to the same quarter last year.

At the start of 2020, Amazon was trading at $1,875 per share, and at the time of writing, the share price is trading at $3,163 per share. This reflects an increase of 41%. The founder, Jeff Bezos, who owns 55.5 million (roughly 11% of the company) shares in Amazon increased his wealth by $71.5 billion. To put this in perspective, it has been 213 days from 1 January to 31 July, so he increased his wealth by $335 million a day, or almost $14 million an hour. This was added already to his vast fortune, placing him comfortably as the richest man in the world with a net worth of around $175 billion. Unfortunately for the high-street, this demand for online goods looks only to continue to grow.

Even though many shops are now open, it is not as pleasant a shopping experience as it previously was. Face masks are now compulsory to enter shops, and due to social distancing measures, only a few customers are allowed in each store at a time.

In addition, many high streets have been impacted by home working as the government gave guidance to “Work from home if you can”. Retailers located within or very close to business districts have been missing out on office worker footfall as people are no longer around to buy their morning coffee or lunchtime sandwich. As many employers remain reluctant for staff to return if they can continue to work from home effectively or are unable to accommodate a workforce under social distancing rules, they may continue to suffer for some time.

One of the most successful retailers with a physical presence, WHSmith, were early to see the demise of the high-street. They closed many high-street outlets and focused on transport hubs, such as airports or train stations, even before COVID-19. Of course, with many airlines not operating for the last few months and with commuters not travelling to the office, you don’t need a crystal ball to know that there will be significant impact on revenue and profits.

The demise of the high-street and shopping centres can further be illustrated with the collapse of Intu Properties, a British real estate investment trust (REIT). It owned shopping centres such as Lakeside and the Trafford Centre. It entered administration in June 2020 citing rent deferrals from retailers due to COVID-19.

Hammerson, another real estate investment trust, which owns shopping centres such as Brent Cross in London and Cabot Circus in Bristol, is also under pressure. Its focus is on retail real estate rather than other types of real estate, and perhaps nothing illustrates the demise of the high-street and shopping centres better than comparing the performance of Hammerson to the UK Real Estate Benchmark: 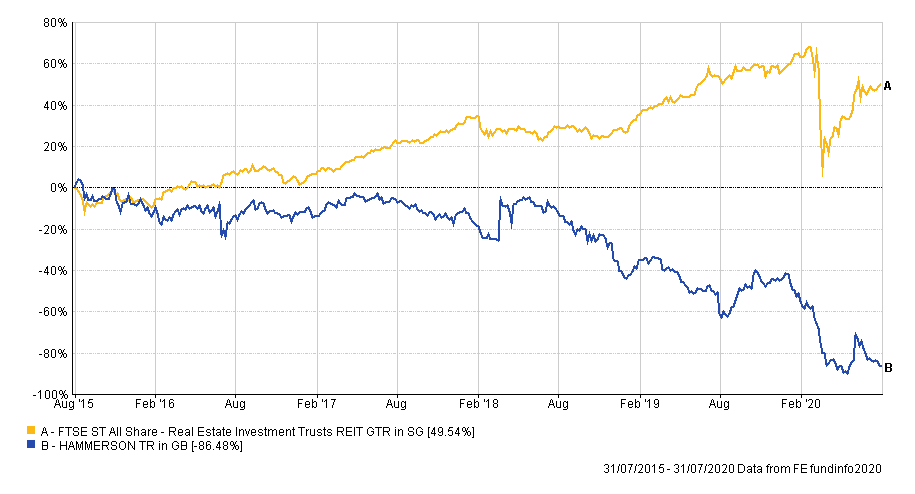 Over a five-year period, the share price in Hammerson has fallen almost 90%, while other UK real estates are looking at a return of 49%, a performance divergence of 139%.

The current state of the high street looks bleak, and as the furlough scheme comes to an end, we expect the bloodbath on the high-street to continue.

The proposed online sales tax will make little difference – it is too little too late. Business rates, while suspended throughout the pandemic, have crippled the high-street and placed them at an unfair advantage. Business rates remained high on the high street, while companies like Amazon are able to operate their fulfilment centres in industrial estates outside of towns and cities where business rates are the lowest and unemployment is high. This additional factor allows Amazon to pay staff less, as well as benefit from lower business rates.

Source: FTSE International Limited ("FTSE") © FTSE 2020. "FTSE ®" is a trade mark of the London Stock Exchange Group companies and is used by FTSE International Limited under licence. All rights in the FTSE indices and/or FTSE ratings vest in FTSE and/or its licensors. Neither FTSE nor its licensors accept any liability for any errors or omissions in the FTSE indices and/or FTSE ratings or underlying data. No further distribution of FTSE Data is permitted without FTSE's express written consent.