Robert has over twenty years’ investment experience and joined Rowan Dartington from Canaccord where he was their Global Strategist and Head of Asset Management for Canada. Prior to this, Robert held the position of Global Equity Strategist at Credit Suisse. Throughout his career, Robert has developed a top down macroeconomic and thematic approach to investment strategy, whilst also developing multi-asset risk based quantitative strategies.

It may not seem like it from the news flow, but the Brexit vote was more than five years ago. Still a point of trauma for many, but not for the UK economy it seems. Consensus forecasts for UK growth and trade prospects are just as buoyant, perhaps more so, than many European counterparts. Indeed, the UK economy stands tall amongst its developed peers. Honestly, I’m surprised. The City of London hasn’t fallen apart and trade with Europe continues, albeit with more friction. There is one glaring difference, however, and that is Sterling. The currency has taken a beating, reflecting the worst of the Brexit possibilities, but unlike forecasts of our nation’s prosperity, it has yet to recover. The “Cable rate”, as it is affectionately known in City circles, is roughly 20-25% below what we might call fair value.

Our fair value model estimates around 20 currency pairs, or cross rates against the US dollar, based on economic fundamentals - an augmented Purchasing Power Parity (PPP) model. The PPP relationship of exchange rate determination works in theory by forcing an equalisation of prices by adjusting the respective exchange rates. The most famous PPP model is the Economist “Big Mac Index” which tracks the relative prices of burgers. In principle the same burger around the world should cost the same and differences should therefore be explained by the exchange rate. Rather than using the relative prices of burgers, our model uses CPI – the national basket of consumer prices. We are also interested to augment the PPP model with indicators that suggest relative competitiveness such as growth, unemployment, and trade. Finally, we have also tried to account for capital flows using interest rates and bond yields.

Estimating all of these factors together over twenty currencies relative to the US dollar produces some relatively intuitive results. The estimated impact of relative GDP and trade surplus drive up the currency relative to the US. The idea being that these are measures of relative economic competitiveness and the exchange rate appreciates to mitigate any misalignment to stop it becoming persistent. Higher interest rates and bond yields also tend to attract more financial capital flows which will also drive up the value of the currency relative to the US dollar. In the opposite direction, a higher unemployment or inflation rate will drive down the value of the currency.

In the case of the UK, the economy has held up relatively well through Brexit, and is expected to continue growing at a relatively healthy clip with a relatively low unemployment rate. All these economic fundamentals point to a higher “fair value” of the Cable rate. In the next year or two, we could see the pound rise as much as 20% against the US dollar.

While the UK stock market more closely represents the old economy, such as resources, than the more technologically advanced US equity market, owning UK assets could be seen as an asset play into stronger Sterling. Brexit cut the umbilical cord with Europe and provided the possibility of independent trade deals across the globe. The recent step forward with Australia might prove to be one of these. As Leonard Coen once sang, “Like a drunk in a midnight choir, I have tried in my way to be free.” Well we may be stumbling into new trade agreements in our bid for freedom, but trade with our old European neighbours continues, and more to the point our economic fundamentals remain sound. Expect a stronger currency to follow. 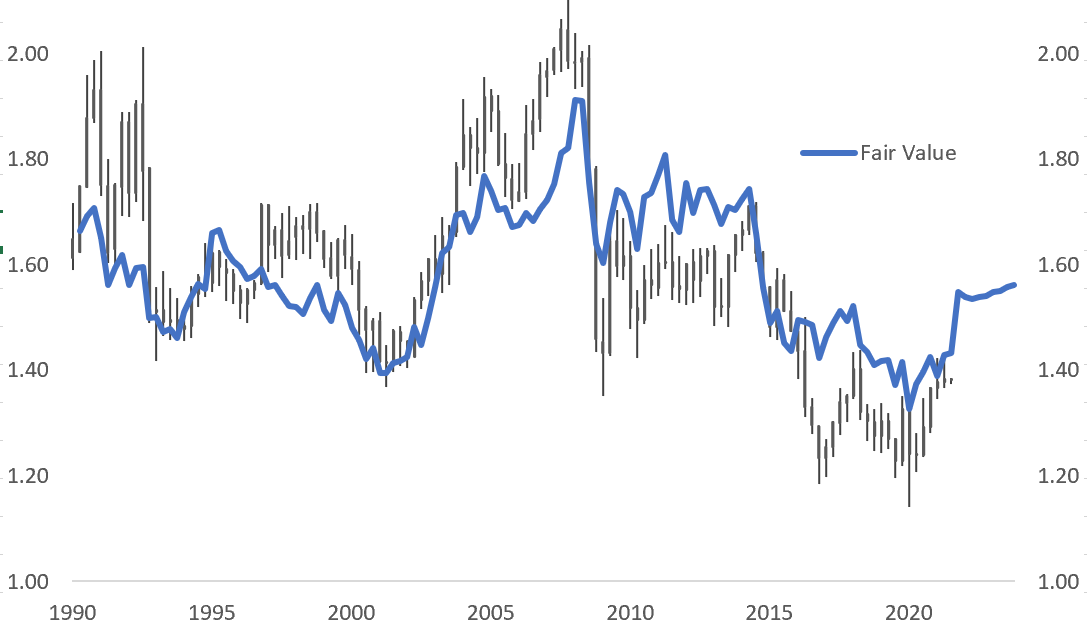 The information contained does not constitute investment advice. It is not intended to state, indicate or imply that current or past results are indicative of future results or expectations.

Full advice should be taken to evaluate the risks, consequences and suitability of any prospective investment. Opinions provided are subject to change in the future as they may be influenced by changes in regulation or market conditions. Where the opinions of third parties are offered, these may not necessarily reflect those of Rowan Dartington.