Not everybody will be familiar with the sci-fi epic fantasy television series Game of Thrones. A hugely popular television series whereby the main protagonists fight for control over the Seven Kingdoms. Alliances and betrayals are a common theme throughout the series - I think you can see where we are going with this. Look closely and there are similarities to be found between the series and the ongoing Conservative Party leadership.

Boris Johnson is the hot favourite to take over the reins from Theresa May when the leadership contest concludes. However, being the favourite to sit on the Iron Throne doesn’t necessarily mean he will be the one with the keys to 10 Downing Street. There are plenty of other Tory hopefuls vying for the hotseat, not least Michael Gove who, having thrown his hat into the ring, has been clashing with Boris again. Other favourites include Dominic Raab and Andrea Leadsom.

It is too early to say who will ultimately succeed, but the Tory party will need someone who can deliver Brexit. The European elections illustrated the country is still deeply divided over Brexit, but the fact that the Brexit party, a party that had only been in existence 6 weeks prior, managed to storm to victory in the elections should be a wake-up call not just for the Tories, but also Labour. The promise of a second vote on Brexit also saw a resurgence for the Liberal Democrats.

The collapse of the vote for the Tories should be good news for Labour, but the truth is the Labour party is as equally divided as the Conservatives. The damage is less severe for Labour as ultimately, they are not in power, but there is a gulf in opinion between those in the northern Labour heartlands and those that live in London. The Labour leadership know this,  which is why their strategy has been to criticise the Tory party and change tack when it comes to their own Brexit strategy. However, the electorate now demand clarity on Brexit, and if the two major parties cannot agree and compromise then they could both be sealing their own fates.

It is widely believed that given the divisions on Brexit it should ultimately be a cross-party consensus on how best to move forward. The incoming Tory leader should be prepared to work with other parties to ensure a deal, rather than simply try to steamroll their own deal through the House.  After all, this didn’t work for Theresa May.

A lesson that MPs can learn from Game of Thrones is that sometimes you have to unite with your enemy to defeat an even greater threat. In the television series it was the Night King and his army of White Walkers. We are not saying Nigel Farage and his Brexit Party are the equivalent, but if Labour and the Tories cannot put their differences aside, at least for a short time, then it could ultimately be the end of both parties. Both could be destroyed by a force that neither side wants.

The clock is ticking on Britain’s departure from the EU.  What does this mean for investors? Continued uncertainty is obviously not a good thing, but we remain favourable on the UK market. It has almost been three years since we voted to leave the EU, but if we look at the performance of the MSCI World Index since 23rd June 2016, it has outperformed the FTSE 100 by 25.46%. Whether the UK ultimately stays in the EU or leaves is inconsequential; whatever we decide to do as a nation will provide certainty to markets. So it stands to reason that investors in the UK will benefit as and when a solution on the Brexit debacle is found. 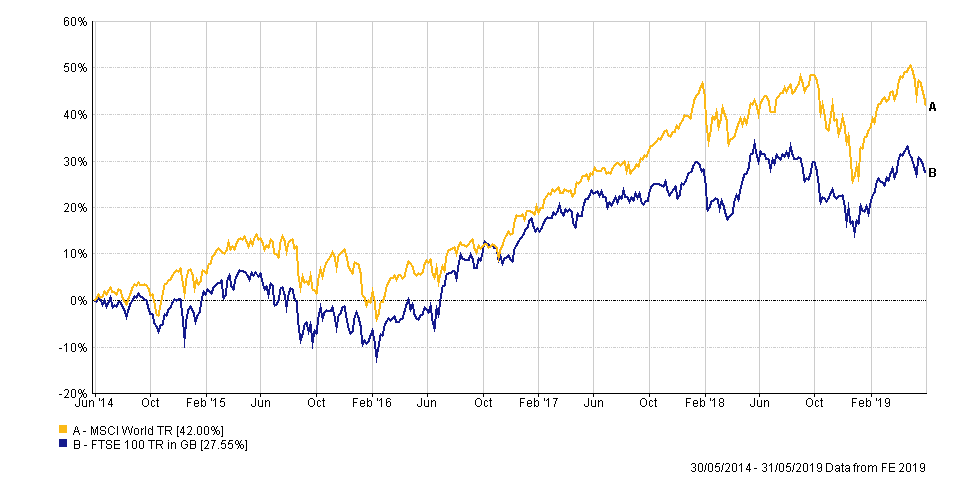 While we remain broadly positive on the UK as a whole, there are still potential dangers that investors need to be aware of. One such example is Thomas Cook whose difficulties have been well documented over the last few weeks.

According to senior management at Thomas Cook it is Brexit uncertainty that is leading to their current difficulties. While it has no doubt had a marginal impact, it is more likely that their struggles are more aligned with their £1.5 billion debt pile they have on their books. To provide some perspective, given the recent plunges in its share price its market cap (market value) is just £265 million. So, the entire value of the company is just 18% of their current debt pile. To ensure their long-term survival they are hoping to sell their airline, the one part of their business that is profitable. Of course, selling will allow them to write-down part of their debt, but unless you can fundamentally change the business model and make the other areas of the business profitable, then you are only delaying the inevitable.

Unfortunately, it remains to be seen whether Thomas Cook will be successful in turning around their fortunes. After all, given their well-publicised difficulties customers would be forgiven for not booking their future holiday with the travel company. If you are booking a holiday, then you want to be sure that the operator will still be in business next year.

Since the 2008 market crash interest rates have been at all-time lows and, coupled with quantitative easing, (which essentially pumps money from the central banks into the banking system) it has allowed businesses to borrow more money at a lower rate of interest. Of course, senior management always believe that they can deliver exponential growth when borrowing money, but when the winds inevitably change direction, then they are always caught out. So, when assessing companies, it has never been more important to pay attention to the fundamentals.

US trade policy continued to dominate investors thoughts last week as the conflict with China escalated and new tariffs at Mexico we added to the mix. President Trump stated that the US and China are nowhere near agreeing a deal whilst the Chinese revealed that it is considering restricting the export of crucial rare minerals to the US. With regards to Mexico, the US President stated that a 5.0% tariff on all goods coming across the border would be tariffed unless the Mexican government stops the flow of unauthorised migrants heading north. The tariff would gradually increase to 25.0% if progress isn’t made. Global equity markets closed out Friday on shaky ground with each of the major indices recording a loss for the week.

Domestically, the large cap orientated FTSE100 fell by -1.6% whilst the FTSE250 dropped by a more modest -0.8%. On the Continent, French and German equities declined by -2.1% and -2.4% respectively with each of them recording sharp losses on Friday. US markets endured a difficult week, capping off their worst month of trading this year. The S&P declined by -2.6% with mid and small-caps performing even worse, despite them typically being viewed as less sensitive to trade disruption. In Japan, the Nikkei fell by -2.4%

Unsurprisingly given the ramp up in tension, sovereign bond yields continued to creep lower. 10-year gilt yields dropped to just 0.89% after a 7 basis points (bps) weekly fall with the US equivalent treasury yield 19bps lower at 2.14%. Meanwhile, German 10-year bond yields dropped to their lowest ever level, falling by 3bps on Friday alone to -0.21%. More than €3.7tn of bonds across the Eurozone are now carrying sub-zero yields.

In the commodity markets, oil continued to retreat from its recent high with Brent declining by -6.1% to $64.49 a barrel. US trade policy coupled with general concerns regarding the outlook for the global economy has led traders to negatively revise their future demand expectations. Elsewhere, Gold rallied by +1.3% with the precious metal closing the week at $1,300 an ounce.

This week sees the release of the latest Purchasing Manager Indices (PMI) for the UK economy with this morning’s disappointing manufacturing number the first of three expected. Tomorrow’s retail sales data from the British Retail Consortium is also worth keeping an eye on. In the US, Friday’s labour market report will see updated unemployment, job creation and wage growth statistics all released. The Institute for Supply Management also releases its PMI equivalents, starting with the manufacturing sector later on today. Federal Reserve Chairman Jerome Powell is speaking at an even in Chicago with his speech likely to be heavily scrutinised for clues regarding the future path for the US Central Bank’s monetary policy.

In the Eurozone, the ECB hosts its monthly policy meeting on Thursday with no changes expected on this occasion. CPI inflation for May is the standout data release of the week with other headline data including unemployment, final PMI’s and retail sales. Official Chinese data is limited although media agency Caixin releases its own version of PMI data covering the smaller, private entities in the economy. There are no major releases in Japan on this occasion.

FTSE International Limited (“FTSE”) © FTSE 2019. “FTSE®” is a trade mark of the London Stock Exchange Group companies and is used by FTSE International Limited under licence. All rights in the FTSE indices and/or FTSE ratings vest in FTSE and/or its licensors. Neither FTSE nor its licensors accept any liability for any errors or omissions in the FTSE indices and/or FTSE ratings or underlying data. No further distribution of FTSE Data is permitted without FTSE’s express written consent. © S&P Dow Jones LLC 2019; all rights reserved.

MSCI makes no express or implied warranties or representations and shall have no liability whatsoever with respect to any MSCI data contained herein. The MSCI data may not be further redistributed or used as a basis for other indices or any securities or financial products. This report is not approved, endorsed, reviewed or produced by MSCI. None of the MSCI data is intended to constitute investment advice or a recommendation to make (or refrain from making) any kind of investment decision and may not be relied on as such.

The information contained is correct as at the date of the article. The information contained does not constitute investment advice and is not intended to state, indicate or imply that current or past results are indicative of future results or expectations. Where the opinions of third parties are offered, these may not necessarily reflect those of Rowan Dartington.